7ish Months… and a ton of traveling and other stuff

Ok, well, one thing I didn’t do: I didn’t run that half marathon I started training for last fall. It was supposed to be in February. I ended up having to travel for work that weekend and when I found out about the trip I lost all my momentum (and I lost my entrance fee I’d already paid too). I also injured my hip somehow and was getting acupuncture treatments for a few months… and then I FELL on my hip while stepping up on a curb while running… so anyway, I stopped running altogether. Maybe I’ll get back to it at some point.

The very most awesome thing that has happened is that I got a NEW JOB that I love! I am still a Marketing Coordinator. But now I am working from home for a not-for-profit society. I won’t go into detail because its a very specific green construction industrial segment that will likely bore you… haha. But it’s not boring to me and that’s all that matters! I’m just absolutely thrilled with my new position.

I have travelled A LOT this year for work (old and new jobs) and a bit for pleasure:

And coming up the rest of the year:

Whew. I’m still cooking lots of vegan food. I’m still Instagramming all the time (obsessed might describe it). And I’m still NOT on Facebook– which is seriously awesome. I never miss it. It’s been months and months and months. I was seriously addicted to Facebook so this was a necessary cutting of the ties. I tweet every now and then, but it’s pretty few and far between.

I want to start blogging on a more regular basis again. I’m trying to find my path though for that. I guess this is a just a general lifestyle blog and my space so I can do whatever I want. I’m thinking maybe some posts on my plants, my home (which we’ve been working on quite a bit lately), nachos of course, my fitness journey, yoga…

I’ve been working from home a little over a month now, but just got my office set up last weekend. I needed to hit up Ikea. I plan to do an office tour soon- when I get it all set. In the meantime- here’s a pic of the cheerful rug I picked, and my beloved Nathan checking it out. 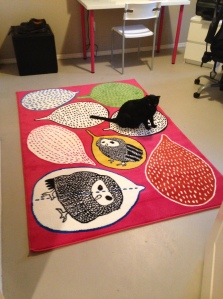 Buckwheaties are dehydrated raw, sprouted buckwheat groats. You can eat them like cereal or grind them up and use as flour in raw recipes. OR you can make brittle!

Several months ago I bought a little bag of buckwheat groats at this tiny local health food store with the intention of making raw cereal. Last week I finally started the process. I looked online for some guidance and found all kinds of conflicting info. Soak them overnight. Don’t oversoak or they won’t sprout. I was confused but decided to wing it a bit and soak them overnight and see what happened.

First I measured out a cup of groats and rinsed them well in a fine mesh sieve. Then I covered them in four cups of water and let them soak overnight in a bowl. In the morning I drained and rinsed them and let them sit in the bowl covered with a tea towel all day. That evening I gave them another rinse and drain and let them sit overnight covered again. The next morning they had sprouted tiny green tails! So cute! (If groats can be cute. Which they can because almost anything can be cute with a tiny tail!)

At that point the groats could have been eaten for a truly raw experience. Or I could have continued to let them sprout and then added them to salads. But I continued my quest for raw cereal. I spread the sprouted groats out on dehydrator sheets and put them in the machine at 115 degrees F. I let them go for about 8 hours. They seemed dry and ‘done’. When I squeezed them between my fingers they crushed easily so I figured they were dry enough.

The next morning (this is, like, four days later from starting the process!) I poured them into a bowl and was about to pour some soymilk over them for breakfast when I decided to give them a taste first. They tasted like I figured they would. Planty. Sprouty. Groaty. They would have been good with some berries and agave or stevia. But it was Sunday morning and I wanted something heartier. And more Sunday brunchish. So I made pancakes.

I decided to follow the advice of one of the blogs I came across and flavor them and give them another spin in the dehydrator. So I made a coating using raw agave and raw cacoa nibs. I mixed the groats with the coating and spread it out of parchment paper (I don’t have those special sheets for my dehydrator). I dehydrated overnight. The next morning I flipped it over and dehydrated another eight hours or so.

groats mixed with agave and cacao nibs ready for dehydration

When I finally felt like it was done I started to break up the big piece to store and realized that not only did I have cereal if I wanted it, but even better I had made buckwheatie brittle!! I decided to enjoy it as a snack. I took a piece to my raw-enthusiast co-worker too. When I received an email from her entitled: “Brittle is the Bomb” I knew I had reached success! And it only took a week! ;) 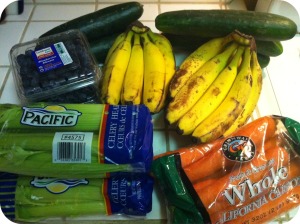 I started the morning with a perfect batch of “Perfect Pancakes” from Vegan Brunch. These are truly perfect. They are fluffy and classic tasting. I make them a lot, but today was the most perfect they’ve ever been. I halved the recipe so I don’t know if this had anything to do with it. All I know is they hit the spot this morning drizzled with agave syrup and served with some pumpkin spice coffee.

And while I enjoyed the pancake breakfast, I read the weekend’s section of Vegan’s Daily Companion. The recipe was for chocolate mousse. A very simple recipe that I happened to have all the ingredients for. I whipped it up later in the evening. I had a hard time getting the melted chocolate to incorporate completely into the mousse. I used my food processor and I think it might have been smoother if I’d made it in the Blendtec. But it still tasted delicious. It is very rich and the half cup serving size is plenty! The recipe makes six servings.

These raw nachos were three days in the making! But they were totally worth it! I was inspired by my friend Ty over at Camera Phone Vegan.  She’s been eating high raw lately and we both love nachos. So when she made raw vegan nachos with a cashew queso sauce, I HAD to try it!

I started out by making juice pulp crackers a couple days ago. I always save the pulp when I juice veggies in a bag in the freezer. I’ve tried a few recipes but the one I used this time is by far my favorite. I used this recipe and the only thing I changed was that I used a half teaspoon of granulated garlic instead of fresh garlic, and I made them in my dehydrator instead of in the oven. I dehydrated them for about 12 hours at 115 degrees F- flipping once after a few hours. They looked like this when I took them out:

I cut the crackers into wedges and then broke them in half for the ‘chips’ in my nachos. When I was ready to make the nachos I arranged them on a plate and topped with chopped romaine and red bell pepper.

Then I made the queso sauce! Holy Moly! This stuff is awesome. I kept eating it out of the blender with a spoon. I used Ty’s recipe found here. The only things I did different were to use a red bell pepper instead of yellow, I added a clove of garlic, and I added a 1/4 teaspoon cumin. I liberally drizzled the sauce over my nachos and it was beautiful! 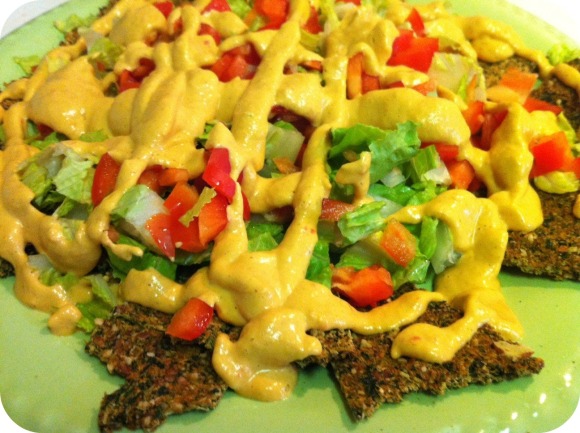 look at that sauce!

I thoroughly enjoyed these raw nachos and I plan to make them again and again! I have leftover sauce that I think I’ll use as a dip for veggies or a salad dressing later this week. YUM!