I think Nathan looks like a Na'vi from Pandora!

Please meet Nathan! Nathan is our playful, fun-loving baby kitty. We adopted him last February after falling in love with him at an adoption event at a pet supply store. He was under the care of The Cat People which is an amazing local cat rescue/support organization here in Bakersfield. He was about one year old then and had been in foster care since he was a kitten. Even though he is about the cutest, sweetest, friendliest, softest kitty in the world, he was overlooked because he is black and then continued to be overlooked because he was no longer a kitten. Adult black cats are the least ‘adoptable’ cats. For me they are the MOST desired!! It is my mission to help save as many grown up black kitties as I can! 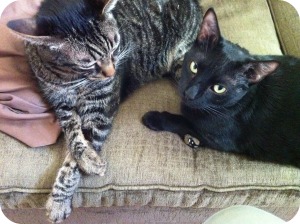 I find Pepper and Nathan hanging out like this all the time!

Nathan adapted to our family quickly and easily. We only kept him separate for about a day. He was friendly to Bas and Pepper even though they weren’t so accepting of him. He wasn’t afraid and just said, “Hey, I’m here now- deal with it!” :) haha.

On Nathan’s cage card at the adoption event it said, “Loves to be combed.” And boy does he! He is a super loud purr-er and when you comb him his purr-box goes crazy! He will let you comb him for hours if you wanted to!

Nathan loves to ‘stalk’ birds through the window and will crouch down and wiggle his little hind quarters and jump at the window. He also has the sweetest high pitched twilling voice. I can’t get enough of his meows! He can entertain himself playing with his various toys and loves to attack the scratching post. I hear him dragging his toys around the house at night, knocking into walls and generally having a blast!

Nathan's fangs are too big for his mouth! I swear I am not doing anything here other than scratching his chin!

Nathan was such a fun and special edition to our family. We just love this little life of the party! 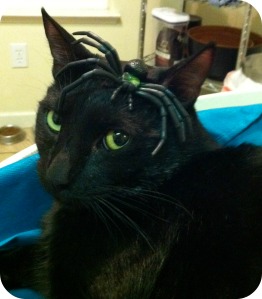