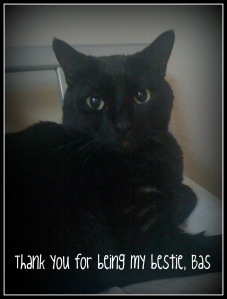 Last week I lost my kitty bestie, Bas. He fell ill and was hospitalized for five days but his little body just couldn’t make it. He died on Monday afternoon, December 19. I’m devastated. Bas was only five years old and I was so unprepared for this kind of loss.

I’m trying to remember the sweet good times (which we had every single day!) but I’m just so sad right now. I know the pain will lessen somewhat over time, but I’m pretty sure it is always going to hurt my heart when I think of him.

Bas loved his tuffy (his bed) and it still holds its place of prominence in our living room. I’m hoping the other kitties will decide they want to sleep there now. I’m giving them that option rather than removing the tuffy. They’ve shown some curiosity about it.

We had one of our favorite photos of Bas enlarged and are having it framed to hang above his tuffy spot so that he will always be around when we’re enjoying company or just hanging out. We also opted for a private cremation so we can keep his ashes. We’re planning a little ceremony once we receive them.

Bas with his papa

My friends and family have been so wonderful in their offering of love and support. We’ve received flowers, a donation in Bas’ name to an animal rescue, a book about Cat Heaven, a beautiful necklace in his honor, money to help pay the vet bills, and countless messages offering condolences. Thank you everyone for your kindness!

Bas was so awesome. Rest in peace little bestie. 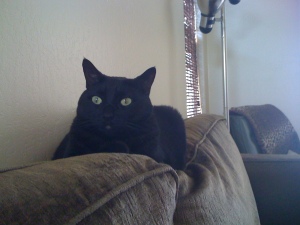 I’m not sure I’ll post anything this week. My bestie kitty, Bas, is very sick and in the kitty hospital. I pretty much have no motivation to do any crafting or blogging, but I might do some holiday baking. I definitely do not seem to lose my appetite when under stress- I guess I’m a stress eater. ;)

So please keep Basi in your thoughts and please pray for his comfort and recovery if you are so inclined.

I plan to make some comfort food casseroles this week, maybe a lentil loaf and mashed ‘taters too.

Merry Christmas to you all! My Christmas wish is for my Bas and all the kitties and puppies to be happy and healthy! 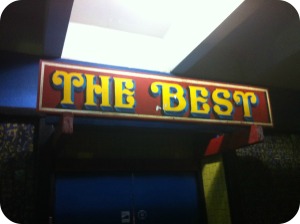 The Wednesday before Thanksgiving was a vacation day for me and David worked a half day. We were heading south to see a band play that evening in Torrance, CA, but knew we needed to leave pretty early to bypass some of the holiday traffic in Los Angeles.

We got very lucky with the traffic most of the way and took surface streets once we were deep in the heart of LA. We almost always take surface streets because it is so much more fun! There’s always stuff to look at and if you see a little shop or something interesting you can just pull over and go in!

We got to Torrance with a few hours to kill before the show and we headed to the Redondo Beach Pier. Neither of us had ever been there that we could recall. It was dark out and there were lots of neat lights and lighted signs around. There was a creepy 80s style arcade with this fun/creepy clown mural out front that I made David pose in front of in his best gangsta fashion: 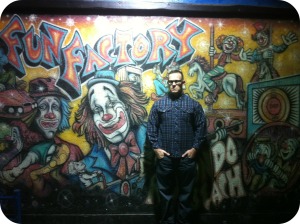 We saw some cool boats, neat birds and some seals (my favorite!). The beach surrounding the wharf area was very pretty. But my favorite thing was this awesome sign with lighted balls for Tony’s! It was a restaurant/bar that I’m sure has been on this pier forever (there was even this sign telling us that- Old Tony’s!) 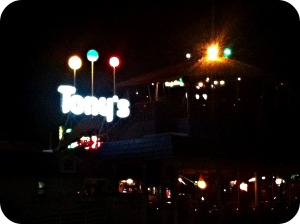 I imagine this pier is packed with kids and families and strolling lovers during the day, but it was really fun to be here the night before a holiday when it was mostly deserted. We wandered around for a long time just looking at stuff. It was a really fun way to start our super long holiday weekend.

Today’s Cat Friends are courtesy of my friend Elisabeth (@CzechVegan on twitter), author of the fun and yummy blog Czech Vegan (In America). Let’s meet her Cat Friends!

Bear and Abbey were born to a feral momma cat in the spring of 2008. A rescue group that I volunteer for took them in, along with their other brothers and sisters after they were weaned off. When they were old enough to get spayed and neutered and after they received all their shots, they were available for adoption at a shelter. At that time we had Shelly (an English Cocker Spaniel from Prague) and Van Gogh (a cat from Atlanta), and we were not looking for any more furry kids. 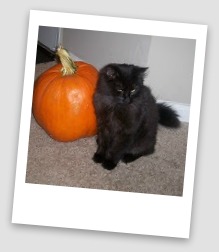 FOA rescue is one of the many rescues that does not adopt out black cats during the month of October. There are two reasons why some rescues don’t adopt out black cats around Halloween. The first one is the fact that some people adopt a black cat and use it as a Halloween decoration for their house or as a part of their witch costume. When Halloween is over they simply return the cat to the shelter or dump it out on the street. It is a cruel and inhumane practice, because these poor cats suffer real trauma from being dragged back and forth from shelter to home and back again. Another reason, much worse, is the fear of people who abuse or sacrifice cats during Satanic and other dark rituals. FOA gets all the black cats out of the shelter for a month, finding them temporary foster homes. We agreed to foster Abbey and Bear together. We first only wanted Bear, but then I saw how codependent Abbey was on her brother and I simply could not leave her behind. Abbey was litter box trained and never had any accidents in the shelter until one night. I came to the shelter one day to find Abbey in a cage by herself (until then she was always with Bear). Someone had separated them for a night. She missed her brother so much that she peed all over her bed due to loneliness and sadness…..

Fostering Abbey and Bear was fun, but also a lot of work since they were still crazy kittens who got into things and made a lot of mess. They chewed up most of our cords and wires around the house, including surround sound cord, several cell phone chargers and subwoofer wire, book corners and magazines… 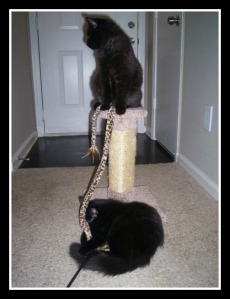 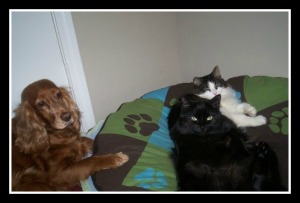 However, we fell in love with them despite all the destruction and craziness. When Halloween was over and we had to bring these mischievous twins back to the shelter, we hesitated. The idea of Abbey and Bear sleeping in cold cages, eating cheap and unhealthy food, being locked up in a cage for more then half a day each day terrified me. They had their new routines at our home, their favorite food, treats, toys, plenty of love and play time, and their new sister and brother (Shelly and Van Gogh). I was also scared that they would be adopted separately, because it is very hard to find a home for two cats together, not to mention homeless black cats are not the easiest cats to adopt out.

We decided to adopt Abbey and Bear and they have been part of our family for over 3 years now. I am grateful for Halloween, because without that holiday, we would not have our kitty twins. 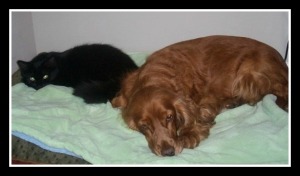 Thank you for introducing us to your kittes, Elisabeth!

7 Random Things From My Childhood

A few weeks ago the darling Heidi of the blog Banana Buzzbomb tagged me in a 7 Random Things post. I LOVE reading lists and Q & A’s about people. Getting to know the little bits and pieces about people is so fun. Heidi is like a little ray of positive, rainbow/sunshine! She is so much fun to follow on twitter and on her blog.

So in honor of Heidi and in case you are curious, here are seven random things about me. But with a twist- they are all things about my childhood: 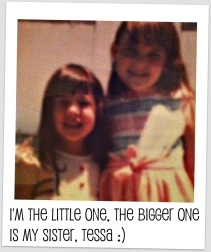 1. When I was little I wanted to be a ‘part-time comedian/part-time veterinarian’ when I grew up. I never understood why my parents and other grown ups thought that was soooo funny. Now I get it. ;)

2. I had a beloved China doll that was a Swedish man/skier. I wanted that doll so bad! I guess I saw it in a boutique with my mom or something because it was definitely not a kids’ toy. But my mom got him for me and I named him Sven. I loved him so much. He has mysteriously disappeared these days. :( Later I got a frog man doll and I named him Sven Jr. as an homage to Sven Sr.

3. I played the cello. I loved it (or the idea of it) but I wasn’t very good and I didn’t practice as often as I should have. When I did practice and messed up I would hit the strings with the bow and make crazy noise to de-stress. This must have led to my love of loud punk-rock later in life.

4. Our family dog was Sammy. He was strictly an outside dog (with his own heat-lamp heated doggie house in the garage). When no one was looking I would let Sammy in and act like he just ran past me. He never just hung out calmly like I hoped. He’d run straight for the kitchen garbage. Then he had to go back out. This was back before we knew about Cesar Milan and calm-assertiveness and all that… ;)

5. My older sister was really into rap and hip hop music. I was not! I was into new wave and punk. But she had the car and the pullout Alpine stereo (HA!). I pretended to hate her music and I was really embarrassed to pull into the school parking lot with the Alpine bumpin’ Eazy E… but I secretly loved it.

6. I loved to cook and bake (and, of course, still do!). I must have been a pretty mature kid because my very protective mom let me make the salad for dinner every night. I used the biggest knife we had to cut all the veggies. I can remember being, like, seven or eight and chopping the salad every night. She also let my sister and me use the oven for cookies any time we wanted. She was probably right there with us, but it seems like we had free reign of the kitchen appliances.

7. I had a brown 10-speed bike (the hipsters would love it today!). I used to pretend it was a black Trans-Am with a purple pinstripe with my name on it. (I was with eight or nine- don’t judge!)

So there’s my random things. I’d love to hear some random (and embarrassing) things about you too!